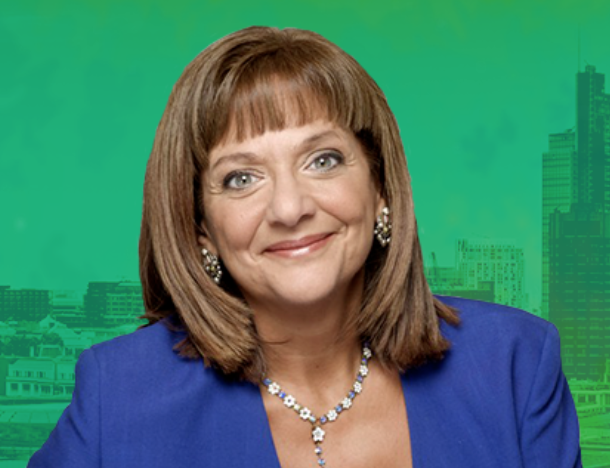 This article by ROBIN POWELL was originally published by the Suitable Advice Institute.

It’s a constant source of frustration to journalists like myself that government minsters rarely say what they really think. It’s not necessarily their fault, of course; it’s just the way that politics works.

It does surprise me, though, that more attention isn’t paid to what ministers have to say after leaving office.

A good example occurred last week. I was privileged to take part in a panel discussion, organised by Tortoise Media, on the UK investing industry. More specifically, we discussed whether direct-to-consumer investment platforms like Hargreaves Lansdown are taking small investors for a ride by charging excessive platform fees and constantly promoting expensive active funds.

One of my fellow panelists was the pensions expert Baroness Altmann, who was a Pensions Minister in David Cameron’s government. I’ve always found her to be an astute commentator, and had the impression during her brief time in office that she would have liked to achieve far more than she was able to.

Sure enough, now free to speak her mind, Baroness Altmann was in fighting form. She described as “questionable” the value provided by the industry, and the big platforms in particular. The Financial Conduct Authority, she said, is “behind the curve”, and consumers need more protection.

Here’s a summary of her key messages.

Big platforms are charging a premium

“Some of the biggest platforms have attracted money with special offers or even loss-leading offers. They have significant sums under management, or on their platform, and they’re charging increasing fees, which are a percentage of the assets on the platform.

“So if you put substantial sums onto one of the bigger platforms, whose fees are no longer as cheap as they used to be, you might well find that you’re overpaying relative to another platform that is starting up.

“Small investors have always had a raw deal in my view in the UK market place. When the big platforms started, it was a very good innovation for the smaller retail investor. But as they have grown I think the value for money has become more questionable. What you have ended up with is customers paying some kind of premium for the service that the platform provides.

“If you value that service and are willing to pay a premium, OK. But if you don’t realise you’re even paying a premium, and if you could get the same sort of service much cheaper elsewhere, then I think we have an issue that the ordinary customer, who really isn’t experienced in these matters, needs to be aware of.”

“For the retail investor who would otherwise rely on the media or Google searches, it can be very difficult to find out enough information in one place to make it time-cost-effective to invest on your own.

“But what I think has sometimes happened — and this is where I say we have got a real problem — is retail investors (have been) misled into believing that the platform has done some analysis and can help them identify the best funds. In fact what might have happened is that those funds have paid the platform to be on their recommended list. 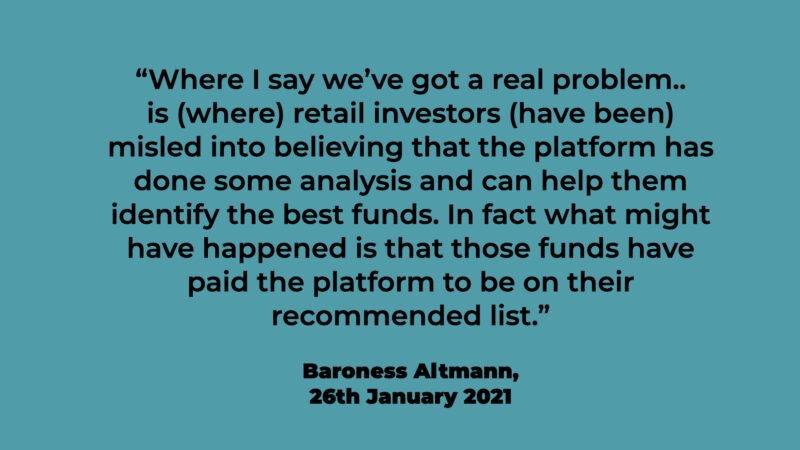 “Even a 0.1% difference in the charging structure, over a long period of time, takes huge sums away from your eventual investment pot. It is important to recognise the danger of percentage-of-asset fees that may sound very low.

“If you put those fees into pounds and pence, people would have a much better idea of what they’re actually paying. And if you also included forecasts of what your fund would grow to under the same returns with a 0.5% charge or a 0.25% charge, I think people would be quite shocked at the eventual difference.”

Money invested on platforms is not as safe as people think

“You need to make sure that the regulation of these platforms works well. For example, I think very few people who have a reasonable-sized portfolio realise that if something happened to the big platforms, like Hargreaves Lansdown, the Financial Services Compensation Scheme would only provide £85,000 worth of compensation.

“Financial education has always been something that we have failed at as a country. The industry has possibly bamboozled governments into thinking you don’t really need people to worry about financial education. Take pensions for example. The standard selling method for pensions was, Don’t worry about it. These clever people in the City will look after your money and you don’t have to make decisions.. And of course, that someone else is going to make quite a bit of money because you are not equipped to do it for yourself.

“The education element has been so lacking, and the asymmetry of information and knowledge is so stark, that most retail investors would be unlikely to be able to manage their way round the investment markets and the financial products and services that are available. Therefore they rely on looking at advertisements or other people’s write-ups.

“There is this belief that the financial services industry has built up, which is that you’ve got these magic people in the City who can manage your money for you and do brilliantly. And of course the adverts cost a fortune.

“When I was managing money in the City, one of the standard procedures was, you set up a range of ten active funds, all investing slightly differently. And you know that probably eight or nine of them are not going to do very well. But one of them might do extremely well. What happens? You promote that one. You don’t tell anyone about the others.

“So it looks to the public as if you’re a brilliant firm. Unfortunately, although you keep telling customers that past performance is no guide to the future, what do they buy? They buy the one that’s already done the best.”

“We’ve got an institutional industry that has actually been tightened up and does much better now, but a retail industry that has been left behind. (Retail investors) are the ones arguably who need best practice and most protections.

“The incumbent fund management houses and insurance companies, for example, have had a huge and unfair advantage over customers — partly because of the asymmetry of information, partly because of the complexity of the products that they were able to devise, which can bamboozle people so much.

“They’ve not been forced to help customers understand it. Indeed they get away with talking in a language that most ordinary human beings don’t have a hope of understanding.

“When customers complain that they didn’t realise what was going on, the regulator says, well, they disclosed it to you. But this disclosure is so confusing that you don’t have a hope of properly protecting yourself.” 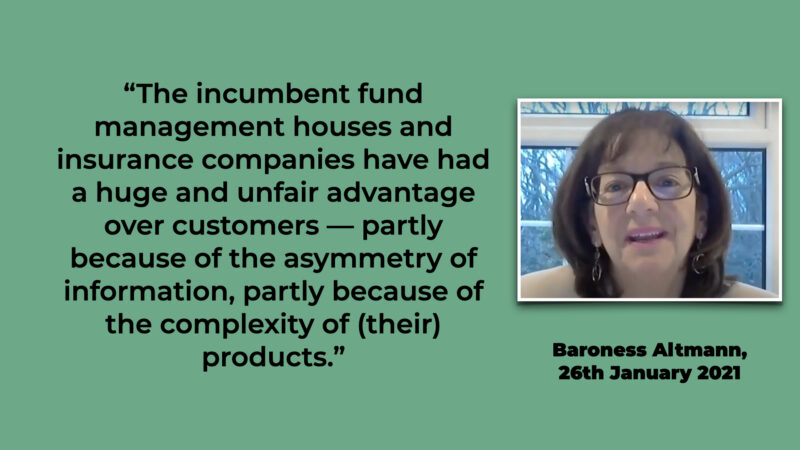 The FCA is frightened to challenge the industry

“We’ve got a regulator who is supposed to be regulating this industry. But I’m not sure they are on top of what consumers need or what is right and fair for consumers. What you tend to see is that regulators are always behind the curve. They’re frightened, I think, to challenge the industry.

“You’ve got the retail investor left at the mercy of firms (like the big platforms), and for me, that is a big problem. What I would hope is that this Woodford example would wake up regulators to work on behalf of consumers in a much more proactive manner than they’ve done so far.

“You had this situation (with Woodford) where a platform was continuing to recommend Woodford even though the platform itself in the funds that it managed was selling it or had already sold it. For me, that’s an absolute regulatory no-no.

“In the institutional investment world, that firm would not be allowed to practise. You’re not allowed to do something so radically different for your own clients than you’re doing for yourself. In most cases you’re not even allowed to deal for yourself at all if you’re then managing money for other people and investing in those same investments.”

Here’s a video of the panel discussion featuring Baroness Altmann: